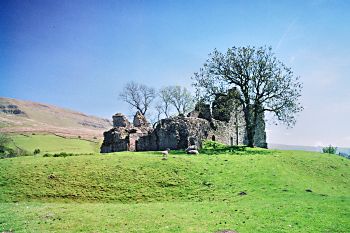 The 12th Century Norman ruin on the site of what is

reputed to have been a stronghold of Uther Pendragon

The existing Pendragon Castle itself is now a ruin and was built six hundred years later than the accepted King Arthur period. It was built in the 12th century by Norman Knight Sir Hugh de Morville who was one of the knights who killed the Archbishop of Canterbury, Thomas a Becket, at Canterbury Cathedral in 1170. The castle is built on the site of much earlier iron age fortifications which were probably in use during the late 5th century.

Alternative sources place Uther Pendragon in other parts of Britain but the area corresponding to the modern county of Cumbria formed part of the Celtic Kingdom of North Rheged and was Celtic territory for long after the Anglo-Saxon invasion.

Carlisle was a Roman fortified town known as Luguvallium and had the Celtic name Caer Luel. It has been linked with the celtic leader Vortigern.

The Norman Pendragon Castle, situated four miles south of Kirkby Stephen. There is also a story that Uther tried to re-route the River Eden to create a moat for the castle.

Kirkby Stephen was once in the old county of Westmorland, abolished in 1974 and incorporated along with Cumberland and a part of North Lancashire into the new county of Cumbria.